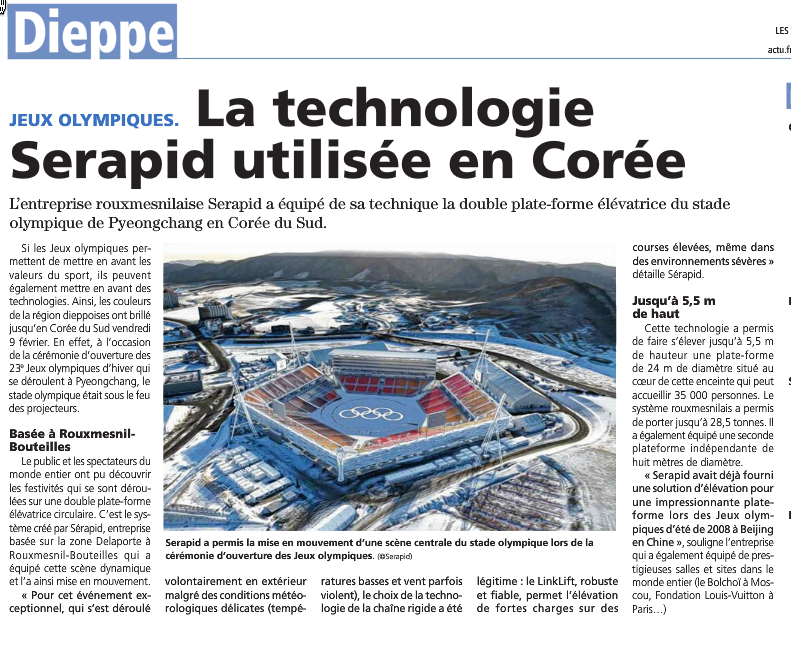 Article on the Meridian Lift supplied by SERAPID for the XXIII Olympic Winter games opening ceremony. You also can read this article on actu.fr website: http://bit.ly/2Bw9iyj .
SERAPID. Uplifting.

The Olympics
The technology SERAPID used in Korea

The Rouxmesnil company, SERAPID, has used its technology to equip the double lifting platform of the Pyongchang Olympic Stadium in South Korea.
If the Olympics highlight the values of sport, they can also promote technologies. Thus, the colors of the Dieppe region shone bright in South Korea on Friday, February 9th. Indeed, on the occasion of the opening ceremony of the 23 "Olympic Winter Games in Pyeongchang, the Olympic stadium was under the spotlight.

Based in Rouxmesnil- Bouteilles
The public and spectators from all over the world witnessed the festivities that took place on a circular double elevator platform. It is this system created by SERAPID, an enterprise based in the Delaporte zone at Rouxmesnil-Bouteilles, which equipped this dynamic scene and set it in motion.
"For this exceptional event, which was held outdoors despite the challenging meteorological conditions (low temperatures and wind sometimes violent), the choice of rigid chain technology was legitimate: the LinkLift, robust and reliable, allows the elevation of heavy loads on high strokes, even in severe environments." explains SERAPID.

Up to 5.5 m high
This technology has raised a 24 m diameter platform up to 5.5 m high in the heart of the chamber, which can accommodate 35,000 people. The Rouxmesnil system has increased up to 28.5 tons. Also included in this system is a second independent platform of eight meters in diameter.
SERAPID had already provided an elevation solution for an impressive platform during the 2008 Summer Olympic Games in Beijing, China, and the company has also equipped prestigious cinemas and sites around the world (Bolshoi Moscow, Foundation Louis-Vuitton in Paris…)

Back to all articles
Blog

07/05/2021 The Opera House of Shanghai Conservatory of Music

25/10/2017 Flexibility as standard
See all the news
Questions ?Contact us